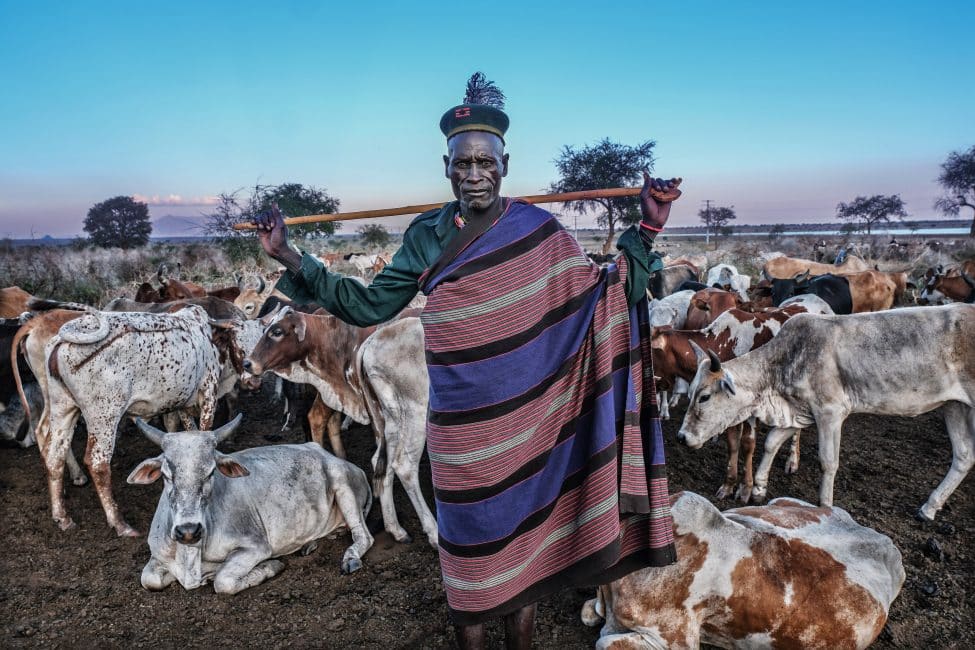 The year 2022 has been a tough one for the Karamojong people of north-eastern Uganda. Last summer, more than 2,000 people there fell victim to food insecurity. The main culprit is climate change, the effects of which are becoming increasingly apparent. Fortunately, these effects can be partially circumvented thanks to pastoralism. Emmanuel Emaruk, the director of our programmes in Uganda, recently visited us in Brussels to explain.

Climate change seems to be increasingly tangible in north-eastern Uganda. What are the consequences for the population?

As in many parts of Africa, climate change is causing extreme weather events that undermine people’s livelihoods. Here in Karamoja, over the past five years, we have seen an increase in climate extremes and unpredictability. We experience heavy rainfall in a very short period of time, leading to waterlogging and flooding, followed by severe periods of drought. 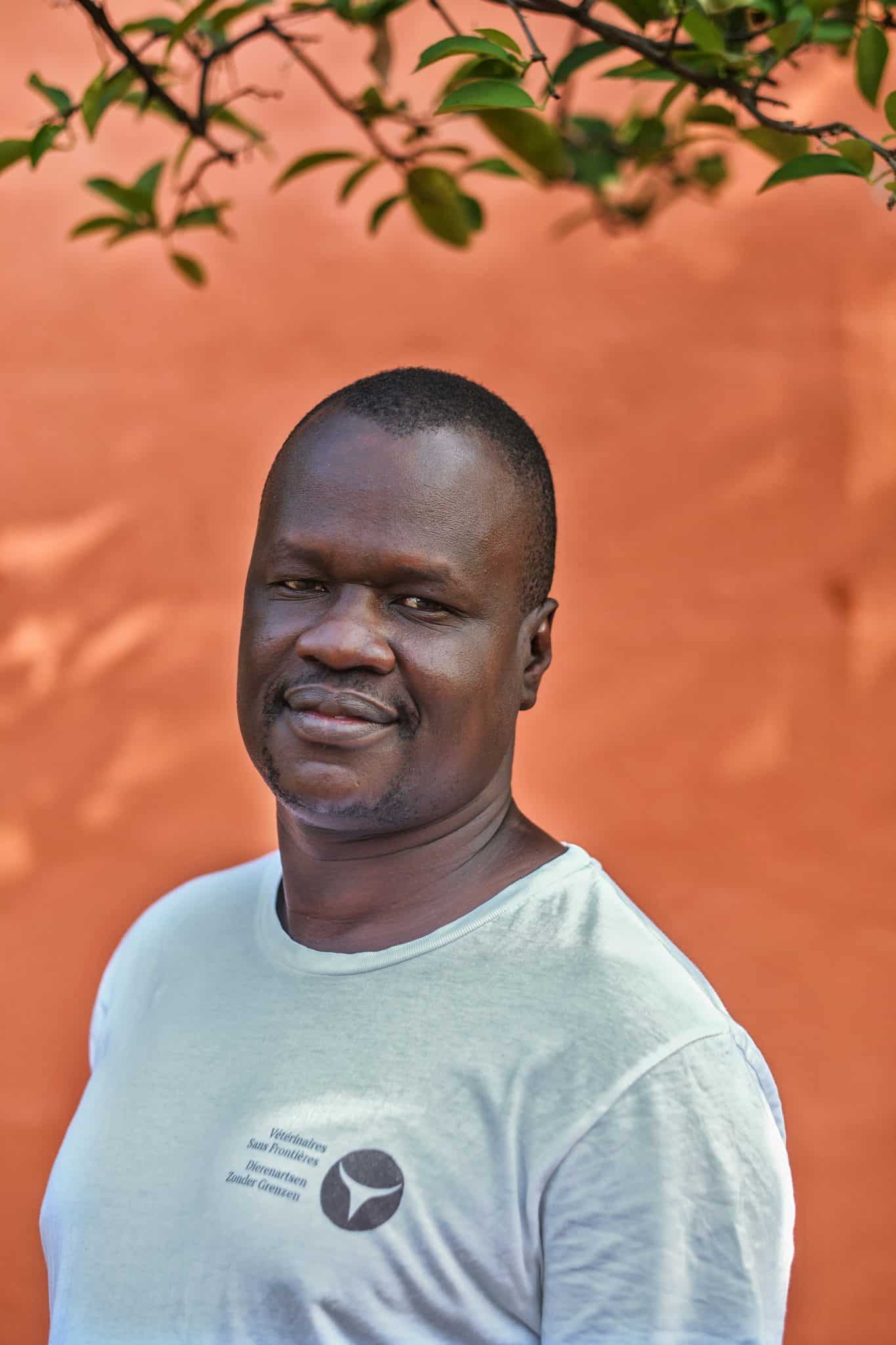 In both cases, arable farmers are the ones most severely affected, as both types of weather devastate the crops. For people who do not have a sufficient understanding of climate change, it is very confusing. It affects their usual response and resilience mechanisms.

Are livestock keepers also suffering from the increased unpredictability of the climate?

Livestock keepers are normally better adapted to the effects of climate change in Karamoja than arable farmers who rely exclusively on crop production. If you put everything into farming and your crop fails, you have lost a year and you have nothing to help you survive until the next harvest. But if you have livestock, you will always have milk to drink, and you can sell an animal to feed your family.

Nevertheless, climate change is also affecting livestock keepers. Floods encourage the emergence of diseases in livestock, and this is happening increasingly often. It used to be that an animal disease would develop into an epidemic once every three years. Now you have several different outbreaks in the same year.

Recently, we’ve had outbreaks of foot and mouth disease, ovine rinderpest, black quarter and contagious caprine pleuropneumonia in just a few months. These diseases are all fatal and highly contagious, so livestock keepers have to be very vigilant if they don’t want to lose their whole herd. Disease prevention, mainly through vaccinations, is key to prevent high livestock deaths, and this is what VSF Belgium promotes.

How is the population reacting to these new uncertainties? 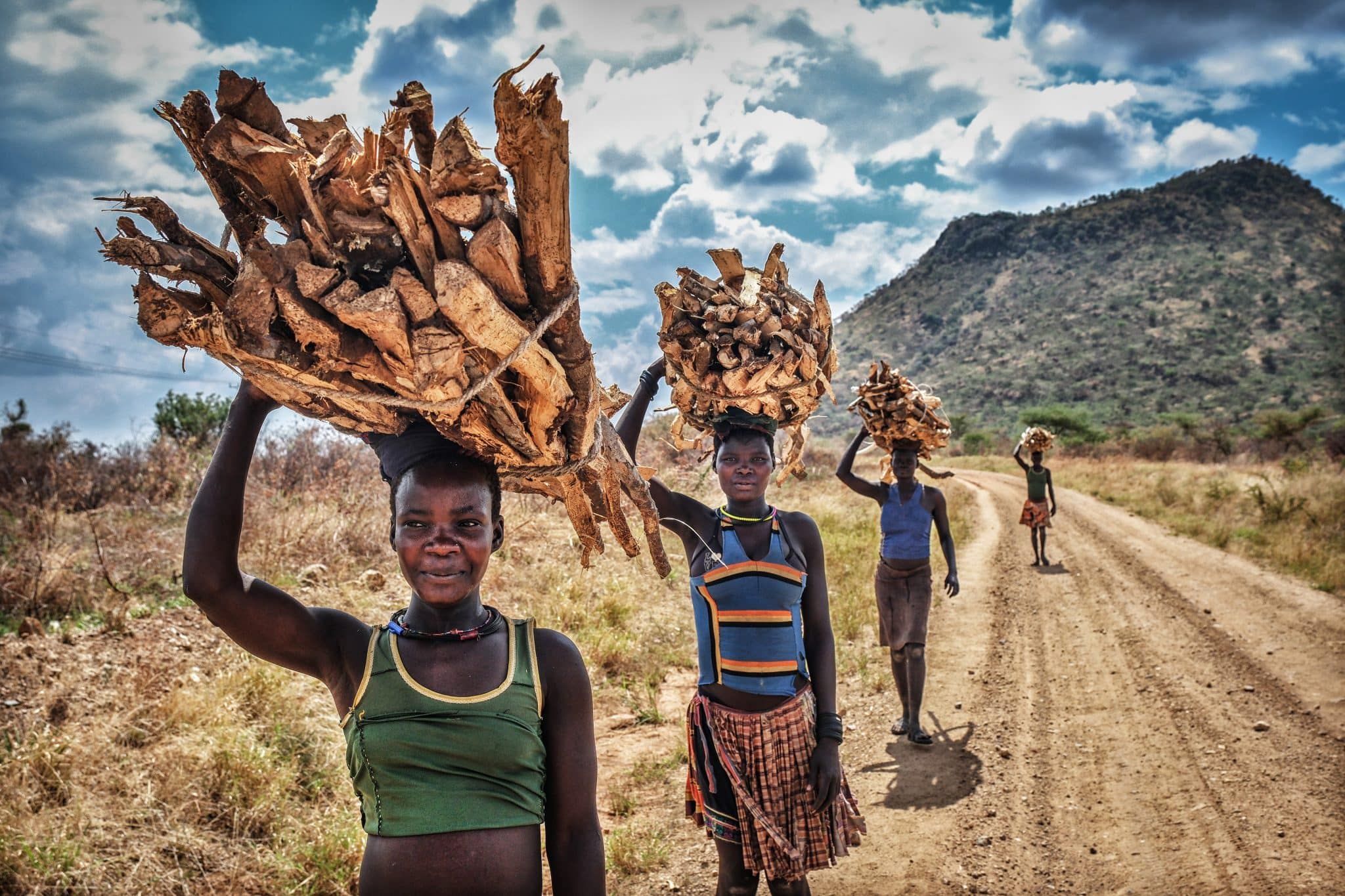 Young women carrying wood to sell on the market. It will be used to construct wooden fences to protect cattle against raids. © TIM DIRVEN

Some young people want to leave the region and take refuge in the city. But without education or qualifications (the majority of the population in Karamoja is illiterate), they soon find themselves begging or at the mercy of people who exploit them.

Others take up woodcutting, even in ecologically vulnerable areas like the mountains, to sell the wood as charcoal on the market and make some money. But this only makes things worse: without trees, the water runs off all the more easily towards the plains. Besides making flooding and crop destruction more frequent, this also increases the likelihood of livestock disease outbreaks.

In your opinion, pastoralism is the most appropriate response to the new challenges in Karamoja. But this is not what the government is promoting.

This is probably the main problem: the policy context does not favour pastoralism. The government sees this traditional way of life as primitive and wants to put an end to transhumance. Instead it promotes sedentary life and intensive agriculture. However, without addressing the intrinsic factors that make crop production vulnerable to climate change (climate variability, poor soil fertility, droughts), crop failure is very likely, and this undermines community resilience. The current food security situation shows the vulnerability of crop production to climate change, as households without livestock are the most affected.

A GROUP OF HERDERS WITH THEIR CATTLE IN NAKILORO VILLAGE, MOROTO DISTRICT. © TIM DIRVEN

At Vétérinaires Sans Frontières Belgium, we are convinced that pastoralism is the solution in Karamoja. Moving with your herd is the only way to live here. Especially with climate change, which will only increase the unpredictability of rainfall. What do you do if there is not enough rain where you are? Or if there is flooding? Whatever the situation, if you are a transhumant livestock keeper, you can always go elsewhere.

Pastoralism is absolutely the most suitable system in Karamoja. In the event of a climate catastrophe, the crops will be lost, but livestock can still be sold. But once the animals are gone, you have no back-up.

Is the death toll in Karamoja this summer related to climate change?

It is clearly related, because it all started with a bad harvest. Due to the extreme weather, we had a poor agricultural season last year. At the same time, because of the Russian-Ukrainian war, food prices on the markets went through the roof. People could not afford food. In addition, insecurity in the region caused significant losses of livestock, which destroyed traditional social safety nets. 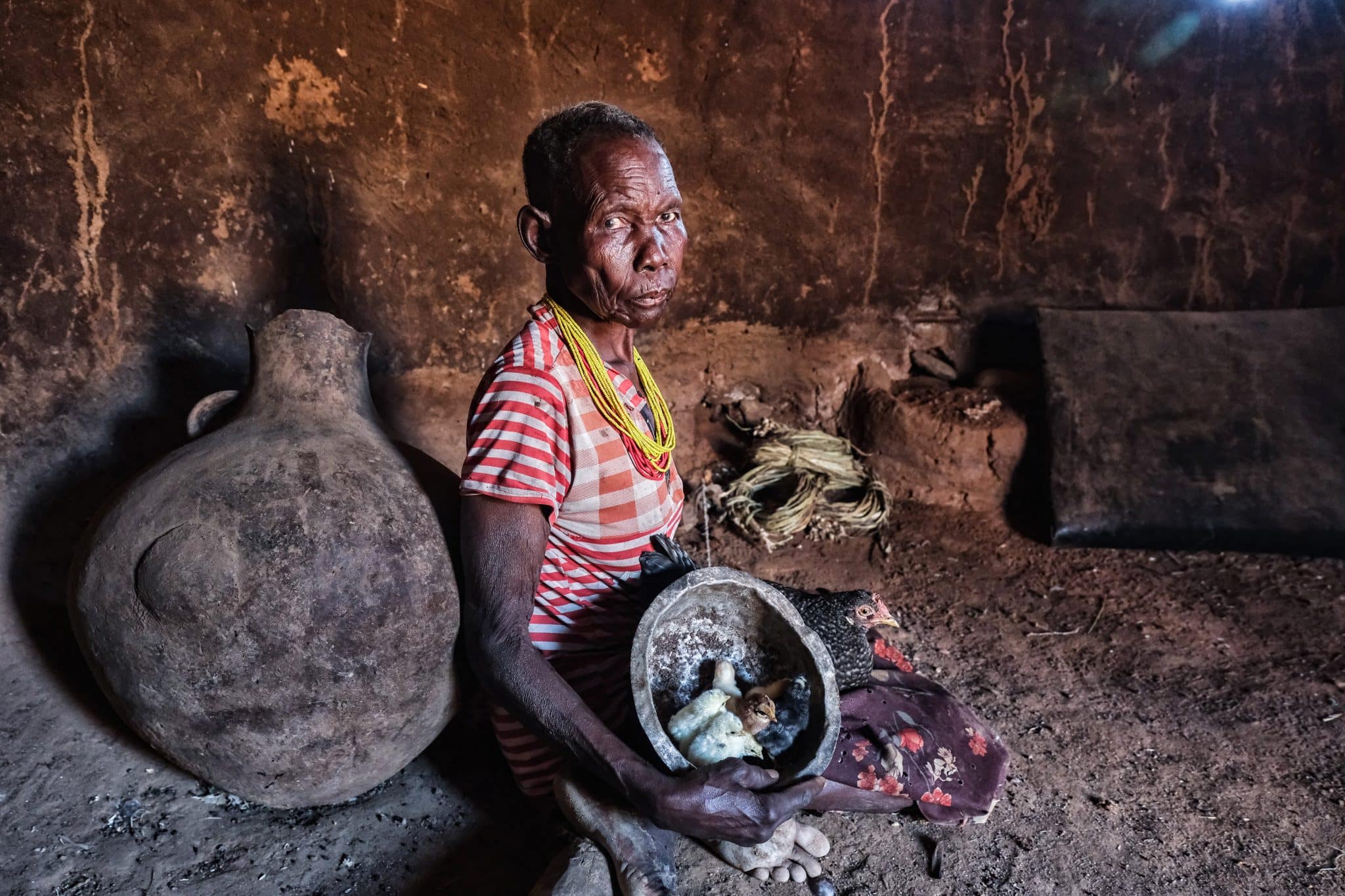 ANGOLEKORI NGOROK, A BENEFICIARY OF OUR UNCONDITIONAL GRANTS, LOST EVERYTHING AFTER CATTLE RAIDS IN NAPAK DISTRICT. SHE SUFFERED FROM SEVERE MALNUTRITION. © Tim Dirven

Of course, we have had droughts in Karamoja before, but people did not starve. The difference this time is that people had no harvest, and they lost livestock at the same time. The loss of livestock led to a loss of purchasing power for livestock keepers, who had been supporting extremely vulnerable people but could no longer afford to feed them.

To survive, people started eating foraged fruit and greens. In some cases, this led to diarrhoea and dehydration. For the weakest, such as the elderly, children and the chronically ill, it was fatal. Nearly two thousand people died of starvation or disease.

What is Vétérinaires Sans Frontières Belgium doing to help the population and the livestock keepers?

With the support of the Belgian Development Cooperation, we have increased the volume of our humanitarian activities to help as many people as possible.

At the beginning of the year, as we anticipated a difficult period due to the poor harvest, we had planned to provide financial aid to 200 people. But very quickly the situation deteriorated and seeing that many people were dying, we urgently revised our plans. We were able to help about 1,500 people, who are currently still receiving 20 euros a month to buy food. Fortunately, other organisations have joined us in the region to help more people and stabilise the food security situation. 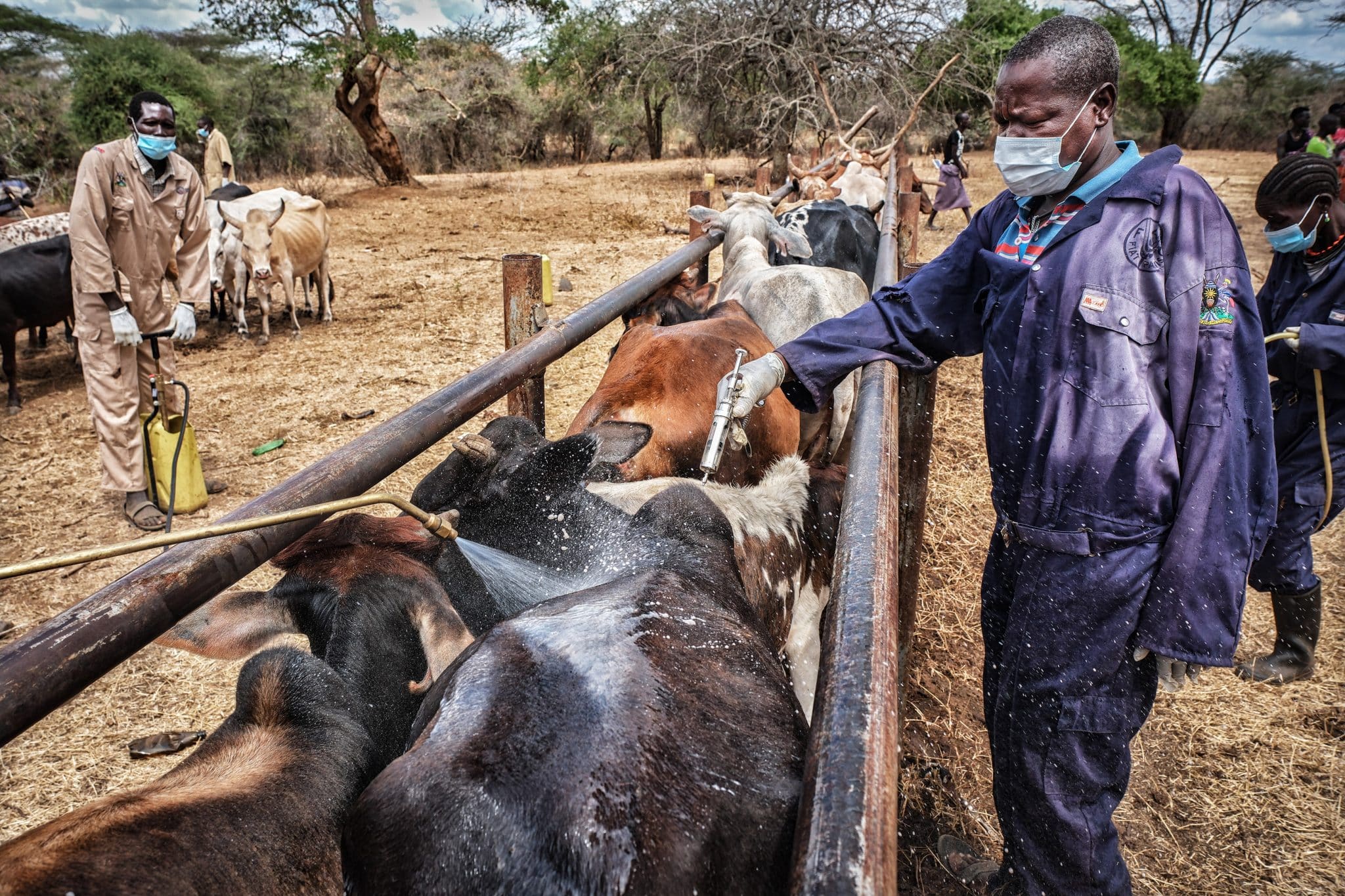 In parallel, we also carried out an emergency vaccination of 143,000 cattle in Moroto, Napak, Kaabong and Karenga to safeguard livestock as the main means of subsistence. We also provided emergency treatment for tick-borne diseases, worms, mange and trypanosomiasis.

Our financial assistance to the most vulnerable people will stop in February, but we will continue to fight diseases and improve wells.

Is the situation improving now?

This year, the dry season arrived two months earlier than usual, in August. The first rains are not expected until March 2023, and it will be another three months before harvest is expected. Water is getting scarce, but for now there is still enough for everyone.

The problem is that our neighbours in Kenya are currently experiencing an unprecedented drought. 50,000 Kenyan pastoralists are expected to cross the border into Karamoja. So we are very worried about the consequences. In January and February, the situation will become very serious for livestock keepers: water holes will dry up and livestock may die because there will not be enough water for all the animals. Not to mention the pressure on pastures.

We don’t know how people will react to the competition for resources. There is a real risk of conflict, especially as the sedentary populations do not look favourably on the arrival of pastoralist communities. To manage resources better and avoid conflicts as much as possible, our teams and partners (including the Karamoja Development Forum) are in permanent dialogue with the populations. But we fear that the situation will deteriorate at the beginning of next year.