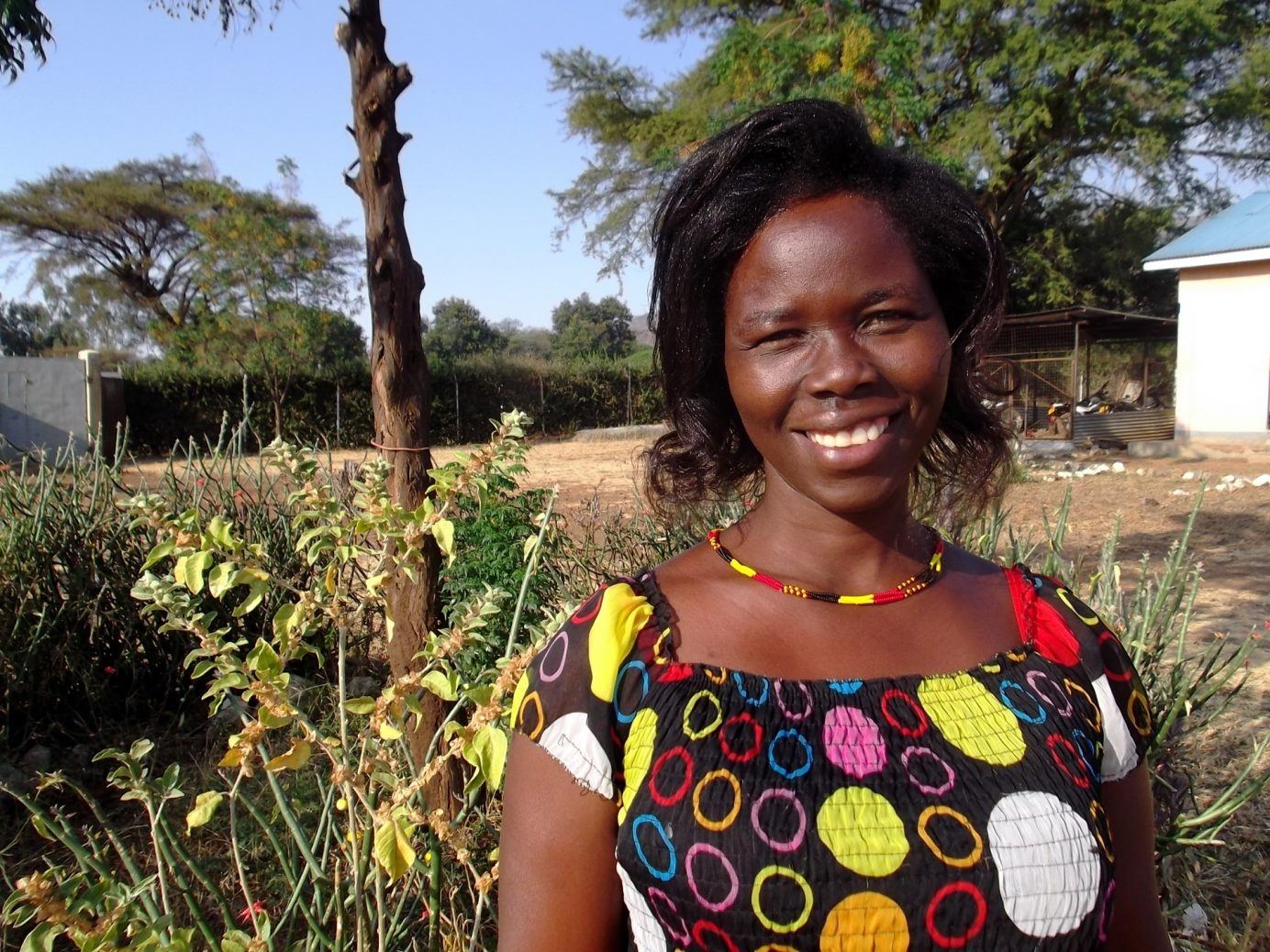 When did you start working at MADEFO?
MADEFO was my first employer. In 2009, I had just finished my written exams when I applied for the job in MADEFO and then I got the job. When I was 5 months pregnant, I was traveling with my husband for Christmas and we got a road accident. I got badly injured, I even lost my ear. But fortunately, the baby was safe in the womb. I resigned from my job to be able to recover and take care after my baby. And then I became in 2012 programme coordinator of MADEFO.

Can you tell me a bit more about MADEFO?
MADEFO was founded in 1998 by people from the Matheniko clan. Many pressing issues were affecting them. High rate of literacy, deepening poverty… That’s why they started MADEFO. It is an indigenous organization, focusing on peace. There were some women who were part at the start, as founding members and some of those women are still in our VICOBA (Village Community Banks, where a group of people comes frequently together to save money and lend out the saved money to group members, red.) women group in Acholin.

What is the role of women in Karimojong society?
The culture of the Karimojong is very strongly focused on men. They are underrating the women who are regarded as housewives: they are supposed to stay at home, and take care of the children and of the small livestock. When there are gatherings of men under the tree, women aren’t even supposed to sit with them. So they were not able to make decisions or to raise their voice on issues that affected their lives. One of the objectives of MADEFO has always been to empower women. 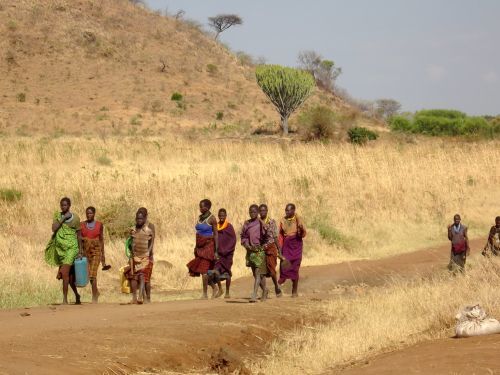 In the traditional setting they still maintain akreket (meeting of the elderly, red.), where women are not allowed. But if it is a village meeting, under the modern setting, women are included. Then women just stand up and raise their issues. Women now also have a say. Women have the right to speak, irrespective of their gender. And they do speak. And what they say is being recorded. Only in very remote settings, where there is no powerful woman to take note of their issues, they still might be neglected.

Women now also have a say. They have the right to speak. And they do speak.

And how is this situation at the household level? What happens in their homestead?

When you just take a walk, you can already see it. Women come to town with their young girls, offering cheap labour. I know that those women are still controlled by this traditional setting of life. So she is the one who has to fend for the family, but she has no power over family resources. The man will tell her to go look for food. She has no say, no decision making power, a man dictates on her. What the akreket has decided will just be implemented. They don’t consider the issues of the women. This is very different than for the women we work with, who have been empowered through the VICOBA (village community banks) and peace building activities.

How do you see that evolving in the future?
That is of course hard to tell. But I imagine, if this kind of women emancipation, and those groups, if they could be extended to even hard to reach places. Maybe that could cause some change. But I think it would be gradually. First in the urban areas, and then little by little to the more remote areas.

How is it to be a woman, leading an organisation here? What are your challenges?
At personal level I feel good. Because even if it is challenging, I am building my career. I take challenges positively, because they make me improve on managerial skills and grow in my leadership role. MADEFO is a local NGO with many challenges. There are always financial challenges and, people have different expectations with which you have to deal. And those managerial skills, I even use them at home. I run my household by myself: I get up early in the morning to prepare food for my boy, I am teaching the girl who helps me during the day how to take care of the child…

“I take challenges positively. It is just a matter of mind-set. Men and women face the same deadlines.”

Do you think it would be different, being a man or woman leading MADEFO?
What I realised is that men, because of patriarchal values, they tend to look at challenges as nothing. To me, it is just a matter of mind-set. Of attitude. Of course there is the stereotypical attitude of society: “a woman, to be a leader? To be a manager?”. But you just have to say “Yes, a woman can also do that”. Otherwise, I don’t see differences. Men also face challenges, just like women. We face the same deadlines. It is about how you perceive it, how you address it, how you approach it.

Where do you see yourself in 10 years? What are your dreams?
At personal level, I really have the urge to obtain my Master in Public Administration. Besides, I also wish to see myself in my own home, which I’m building, settled with my family.
At organisational level, I envision MADEFO being somewhere. Even able to get direct funding, the capacity to write proposals and win funding directly. Think big, that will always help you.

But it is true that it is not easy, being a woman in this society and making career. I saw my sisters and friends marry, and I saw them drop out of school, stop their careers and even get beaten. And I said no. I want to pursue my dreams. I want to do this alone, this is my life. If I get married, I will not be able to achieve what I want. And I knew what I wanted: study, a job and then get married. So I did not engage with anyone, since I wanted to pursue these dreams. This is the advice I can give you, live your own life, follow your own dreams. And so I did. I studied, got a career and got married. All according to plan!

“Getting married would have stopped me from pursuing my dreams. So, I only got married at the age of 30, when I had studied and started my career.”

Sunday is International Women’s day. Is it known? Is it celebrated?
It is a recent thing for us, from when Uganda started recognising the importance of gender, women empowerment and women emancipation. Maybe 20 years ago, it was not known in Karamoja. Now, the rural women will still not know, except if there is an organisation working on human rights or gender. It is only known to the urban women.

And what do those urban women do on Sunday? Will their husbands prepare for them breakfast?
Oh no, you will still see them doing what they do every day. In the beginning when I was still in high school with only girls, all the male teachers would cook for us, and we would parade and celebrate. It was our day. It was exciting. The perception was that it would be the day that women would rest, would not have to wash, not even have to wash babies. The men would do it, all the male family members. Only one day a year. That was the perception.

But, in reality, there are few men who understand. If you don’t do the usual things, if you don’t cook, you will get beaten. The man will ask “What, what about women’s day? What is it? Does it change you from being a woman? How do you expect me to cook? How do you expect me to bathe children?”. So it has become like any other celebration day, like Christmas. We come to the celebration place, people perform, and there are speeches. But if you go back home, you would have to fulfil your tasks. Your roles remain. So you have to go and celebrate, and know that it doesn’t change much. Although there are some husbands who understand, like mine.

“Women’s day is celebrated. But your roles remain. You would still have to fulfil your tasks.”

Does he prepare for you breakfast?
Haha, no. Well, he would do that. He would tell me “Lucy, sit, and I prepare”. But then I would feel bad seeing him cook. I would appreciate that he appreciates what I do, but I would cook. So, women’s day doesn’t really change much for women. It’s just a celebration, that’s it.